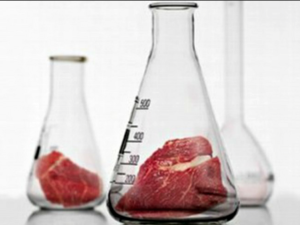 Dr. Mark Post, a researcher at Maastricht University in the Netherlands, served up a lab-grown hamburger patty for taste testing at an event in London in 2013.

Now, the price of that patty has been scaled back from $325,000 to a much-more-affordable $11, Post told HuffPost Live. He added that his research could have serious environmental and ethical applications, as it suggests that lab-grown meat could replace animal consumption.

“I think really the most important driver is the realization that livestock beef production has serious issues. It will not be able to match the demand in 2050 — the global demand — so we will have a shortage,” Post said. “It comes at the expense of a lot of environmental damage, because cows emit methane. And there are increasing concerns about the animal welfare issues.”

Carolyn Mattick, a fellow with the American Association for Advancement of Science, told HuffPost Live that in-vitro meat production would require just one-sixteenth of the land that current beef production uses, but she warned that researchers would have to use large quantities of energy to cultivate the meat.

What are your thoughts? Let us know in the comments below.

make sure all lights are close to green