Misconception: Juice cleansing can remove toxins from your system.

Actually: To say that drinking juice detoxifies the body isn’t quite the same as claiming leeches suck out poisons, but it’s fairly close.

The practice of cleansing has become as ubiquitous as the use of hand sanitizer. Celebrities do it. Spas offer it. Fancy food stores sell pricey bottles of juice to accomplish it, and a $700 juicer will soon facilitate the process for those who are not satisfied with the current D.I.Y. options. But what is it that everybody is trying to remove from their bodies? Is there any science behind it?

“People are interested in this so-called detoxification, but when I ask them what they are trying to get rid of, they aren’t really sure,” said Dr. James H. Grendell, the chief of the division of gastroenterology, hepatology and nutrition at Winthrop-University Hospital in Mineola, N.Y. “I’ve yet to find someone who has specified a toxin they were hoping to be spared.”

Toxins exist. Doctors typically define them as something that enters the body that has a damaging effect on its own — like pesticides, lead or antifreeze — or in large quantities, like alcohol or medications such as acetaminophen, the active ingredient in Tylenol.

But for the most part, the body handles toxins just fine on its own.

“The human body is well designed to eliminate wastes and toxins, and a number of organs play a role,” Dr. Grendell said.

The kidneys and the liver do the main removal work. They draw substances out of the bloodstream and process them for the body to excrete as feces and urine.

When asked what about this process would be helped by juice, Dr. Grendell seemed at a loss.

“It’s hard to understand because there is no good scientific evidence that a juice cleanse, or any other food for that matter, is particularly relevant to removing toxins,” he said.

This isn’t to say that drinking vitamin-rich, antioxidant-filled vegetable juice can’t be beneficial for one’s health, he added, or function as an effective tool for weight loss or resetting one’s habits. It’s the vague talk of toxins that reminds doctors of leeches.

Dr. Antoinette Saddler, a gastroenterologist at the George Washington University School of Medicine & Health Sciences, agreed to read through one of many blog posts available online about cleansing. She said she was perplexed from the beginning.

A juice diet rests the stomach, it claimed.

“Why does the stomach need resting?” she asked

She read further. Juices require less of the stomach’s digestive processing, it said.

“Who said that was beneficial?” she said.

And then she got to the inevitable detox claim: Juicing “allows the body to have more of the resources it needs to support the phases of detoxification, and even to begin to help remove the cumulative toxins stored in the body.”

“What does that even mean?” she said. Exasperated, she stopped reading.

The blog post was actually written by a doctor, Dr. Woodson Merrell, the author of the book, “The Detox Prescription.” Reached by phone in his Manhattan office, Dr. Merrell, who practices a mix of Western medicine and indigenous traditions, such as Chinese medicine, seemed resigned to dismissive attitudes from gastroenterologists.

Dr. Merrell said what it comes down to for him is that Americans need to eat more vegetables, period. If juicing is the path to that, great.

“The whole thing about juice is it makes that easier to get. And it’s easily digestible and absorbable,” he said.

As for resting the stomach, he believes well-chewed food is as good as juice, but most people don’t chew well.

“I’m a fanatic about chewing,” he said.

For Dr. Merrell, juice — like any healthful food — provides nutrients that help the liver process toxins, much like grease on a gearshaft. He warned that juice should be thick and contain all parts of the fruit or vegetable, including fiber.

“I’m not talking about some thin watery juice,” he said.

But he also acknowledged that cleansing “has been so overly hyped. Lots of people making wild claims of things.” 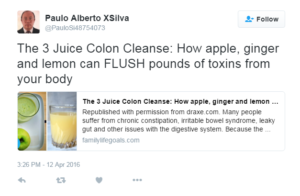 Similar confusion enters the realm of the colon cleanse, another planet in the detox galaxy. But colon cleanses, which can come as herbal remedies in the form of pills or teas or blended drinks, and sometimes as enemas, don’t push out toxins any more than juice.

“I understand the intuitive appeal of using these colon cleanses — ‘Get the toxins out, make your abdomen feel better,’” Dr. Saddler said.

But that intuition leads one down the wrong road, scientifically.

Stool is actually beneficial to the lining of the colon. Increasingly, doctors are even tapping into its benefits, she said, for example transplanting stool from healthy people into the guts of sick people.

“The idea that stool is somehow poisonous and toxic is very misguided thinking,” she said.